Like all automotive suppliers, the manufacturing companies are confronted with rising customer requirements in terms of variant diversity and falling batch sizes. Due to this, the production organisation is faced with the task of optimising all setup processes or making them more flexible so that the setup process ties up very little capacity.

The motto is exchange setup time for production time for as many variants as possible.

The goal of the Lean Consultancy:

In order to optimise setup time in the long run, the work processes and contents on a welding robot were to be analysed and waste methodically eliminated in an SMED project (SMED = Single Minute Exchange of DIE).

During the Consultancy project, the following methods were used:

The analysis of the actual situation revealed the following weak spots: 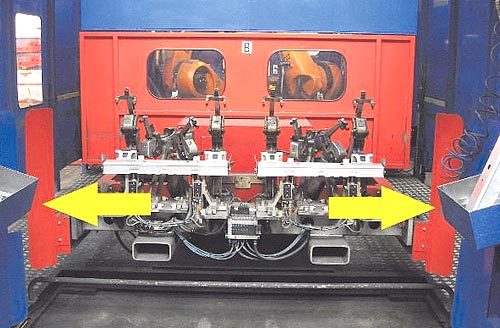 Obstruction of setup process: tools must be lifted across material depots 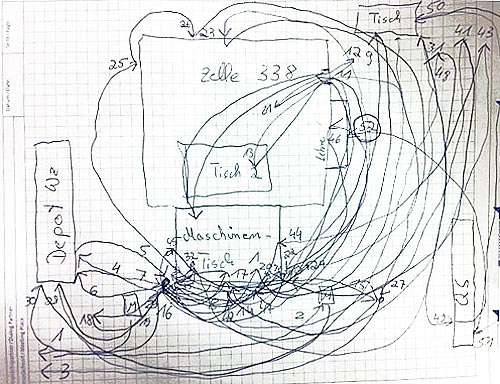 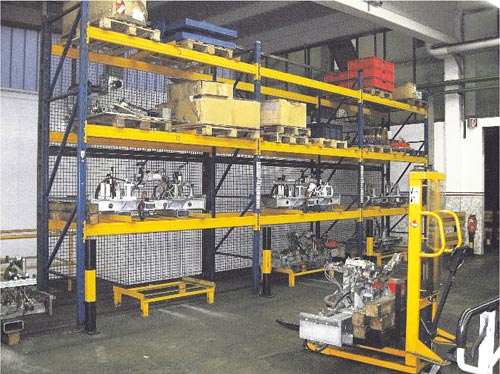 Tool rack is not fully used: Due to limited lifting height of the hydraulic carriage, the rack can only be used up to and including the second level. As a result, tools remain on the floor (left hand side of the picture).

During the consultancy, the team developed an optimised setup process. An action plan and a standardised setup instruction made the actual implementation in the factory easier.

For example, all material depots can now be moved aside within the machine, and the setup process can be carried out without obstructions.

Shorter setup times also result from the fact that the needed devices are now provided by the conveyor directly at the machine on setup trestles. Internal times have been converted into external times.

Furthermore, by using a suitable forklift, the tools can be placed on the racks in all places. The previously used spaces next to the rack are now available for setup trestles and trolleys.

Due to the use of closure clamping devices, special setup tools are not necessary.

By placing tools on setup trestles, they only have to be lifted and lowered a few centimetres. 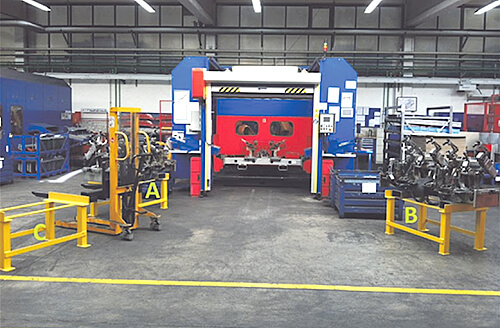 Setup trestles allow for a minimum of vertical movement when retooling.

The setup optimisation reduced the setup time at the welding robot from 64 minutes to 5 minutes. This equals a time saving of more than 90 %. With the measures successfully implemented here, the setup times of two more welding robots can now be reduced as well.

Setup trestles allow for a minimum of vertical movement when retooling. Conclusion The setup optimisation reduced the setup time at the welding robot from 64 minutes to 5 minutes. This equals a time saving of more than 90 %. With the measures successfully implemented here, the setup times of two more welding robots can now be reduced as well. If the annual setup time saving on one unit alone equals already 132 hours, a time saving of 396 hours ( = 49,5 shifts) is achieved with three optimised machines. In this project, it meant a significant reduction in additional shifts on Saturdays.

Thanks to the time savings, an average of7425 more parts can be produced per year. For three workstations, it means 22.275 parts more than before the optimisation.

The expenditure for the setup optimisation is manageable: four closure clamping devices of 75€ apiece and three setup trestles made by the locksmith`s shop for approximately 1000€ apiece. 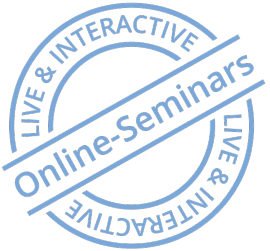 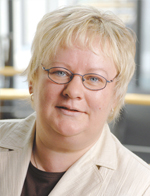